Credit – Buy now what you can’t afford in the hope you can pay for it later. -Noel Whittaker, Making Money Made Simple 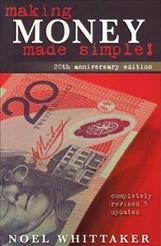 FURTHER READING: Making Money Made Simple by Noel Whittaker. Whittaker is a legendary Australian financial planner and author who writes regularly for newspapers. This was the first money book I read and I highly recommend it.

If ‘Pay off my debts’ was not already on your list of goals, and you are in debt, then it has to go on your list now. Why? Because debt can stop you from achieving your financial goals. Debt can stop some people from achieving any financial goals. If you are in this situation, please refer to the Financial Information Service (through the Services Australia site), Lifeline or a financial counsellor. You can find a list of financial counsellors for all states and territories on ASIC’s MoneySmart website. These contacts are free and essential if you are or think you may be at risk of becoming bankrupt, which is when you are unable to pay your debts and so you are forced to give up your assets and control of your finances.

I emphasise the problem of being in debt so much because Australians are currently in a bit of a crisis in relation to our levels of personal debt. Have a good look at the graph below. The blue line shows average household debt as a proportion of annual household disposable income. It has skyrocketed from just over 60% in 1988 to 200% in 2018. It stayed really flat over the 1980’s then it just took off, taking a slight breather over the years of the Global Financial Crisis (GFC) before rising again.

The red line shows the percentage of Australians’ disposable income that the interest payments of that debt chew up, and how much it has gone up and down over those years. 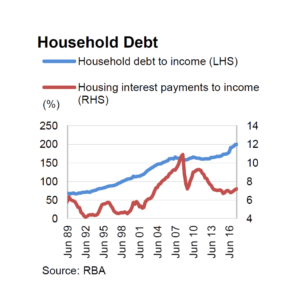 The worrying thing about this graph is that it shows Aussies are paying around 7 percent of their income to service their household debt at a time when mortgage interest rates are at record lows. It is my great fear that when interest rates rise, as they must, millions of Australians will find their debt too large to handle.

Canberrans currently have the highest per capita level of personal debt in the country. Hey, Canberra people, be proud of Questacon, Floriade, maybe even the Summernats, but don’t be proud of that figure. 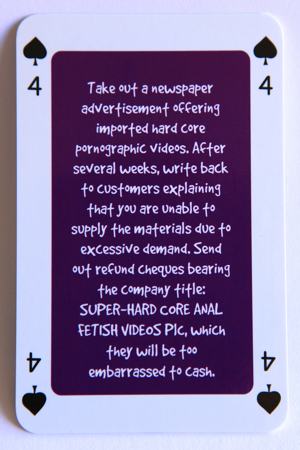 Different types of debt (also called credit) from, roughly, highest to lowest rates of interest are: pawnbroker and payday loans (Note: pawnbroker is spelled p.a.w.n not p.o.r.n – you have to be rather clear about that for residents of the NT and the ACT), store credit, store cards (like a David Jones card), credit cards, personal loan, car loan, investment loan, house loan (a mortgage), HELP (formerly known as HECS), and family and friends.

Credit allows people to bring forward their consumption – have it today, but the price of having more now is having much less in the future.

Before we look at these debts in detail, I need to clarify something. The word ‘credit’ can have two very different meanings in financial terms. The good meaning is where you have an account ‘in credit’, for example a bank account or phone bill – a pre-paid mobile phone should always be in credit. The bad meaning is debt. So a ‘credit’ card means you are in debt to Visa or MasterCard etc. for purchases you make with these cards. ‘Credit’ available to approved customers literally means ‘debt’ available to approved customers.

Before you are given credit from an institution like a bank, you will be subjected to a credit check. They will look up your credit file with a company like Equifax, Dun and Bradstreet or Experian to see when you have previously applied for credit, when you were given credit and when you defaulted on any payments. Any payments – including things like electricity, gas and phone bills. We have all probably forgotten to pay one of these bills at some point, or found our name on a lease when somebody else has not paid the rent. This sort of thing will be recorded on your credit file. And it’s not just bills that get to 60 days overdue that will appear on your credit file. Nowadays, anything that’s just five days late will show up as a black mark against your name. A great site to get more info on credit reporting in Australia and the recent changes to credit files is called Credit Smart. One of these changes includes a move to a system where potential lenders get to see your credit score – a number between zero and 1,200 which indicates your credit worthiness (the higher your number, the lower the risk you are to lenders and the lower the interest rate you are likely to be offered for credit). To see what your credit score is go to Get Credit Score – it’s quick, easy, free and doesn’t effect your credit record. When Claudia and I checked our score we were rated at below 1,000. Buggered if I’d know how you score a perfect 1,200. 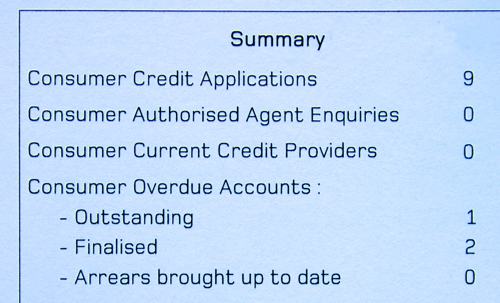 This pic is of the summary part of a credit file. I hope your credit file

has a zero next to the word ‘Outstanding’.

Sometimes you have things on your credit file that should not be there for whatever reason, including that you did not even apply for credit from a company that has you blacklisted. This often happens to people with fairly common names. It is in your interest to know what is on your credit file and to correct any problems before you next apply for credit. You can do this for free once every 12 months by contacting Equifax, illion, or Experian and requesting a copy of your file, which they must send to you. If you want it in a hurry they will charge you up to about 60 bucks for it. 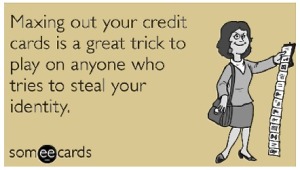 Equifax also offers a service called Equifax ID Basic for a fee of about $5 a month. Whenever there is a change to your credit record they will notify you by email, so if anyone is trying to access credit using your name, you will know about it before they are able to do any damage. Effectively, it’s insurance against identity theft. If you don’t have this protection and have fallen victim to identity theft, get onto iDcare as soon as you can.

Just when it is becoming harder and harder to steal new cars, identity theft is rising. There are a few ways to protect yourself: never throw paperwork in the bin with your name, address, date of birth or any financial details (bank account details, tax file number, Medicare number, etc.). Always shred these documents before feeding to the worms – you can pick up cheap manual shredders for less than $20. Don’t let your credit or debit card out of your sight when using it (i.e. pay at the register rather than handing the card to the waiter/waitress), and always sign a new card as soon as you receive it. Keep your phone as safe as you would keep your wallet or laptop. Always keep passwords secure and make sure your internet security software and operating system is up to date. And keep details like your date of birth away from your Facebook page. If you are as computer illiterate as me (yes, I’m surprisingly hopeless with technology) go to YouTube and watch Symantec’s short videos titled Quick Guide to Scary Internet Stuff. You don’t have to buy their software, just use their resources. Or you could simply upgrade to a Mac. Uh oh. Just offended a bunch of you.

Let’s go back to those different types of debt.

Non-tax deductible debt you must reduce/eliminate

I’ve removed investment loans from the previous list, as I will cover them later because they fall into a different category – they are tax deductible. All the other types are loans you must get rid of because they are costing you a lot of money. They all fall into the category of non-tax deductible debt. Basically this means that, generally, you cannot claim any of these loans on your annual tax return (although, because taxation is so complex, there are always exceptions to this rule).

Anton enlisted in the military straight out of high school. While visiting home on leave, his father presented Anton with an opportunity to “build a credit history”, by co-signing an application for a credit card (with a $5,000 limit). Anton’s father explained that a credit history comes in handy when asking the bank for a loan and allows you to “play with someone else’s money”. Accompanying this ‘sound’ advice was a heavy dose of guilt, as his father was trying to hide from the tax office. Begrudgingly, young Anton agreed to his father’s not-exactly-subtle plea for help.

Four years later, and out of the military, Anton finally got to see a credit card bill and… shock! His father had racked up $3,000 worth of bar tabs! The guilt was now worse as his father had had his lower leg amputated and couldn’t work, and Anton was reluctant to further cut off his old man. Pardon the pun.

Then Anton met Frances who helped him to finally come around to his senses and explain to his father that he simply could no longer carry his father’s (largely alcohol-related) debt. Anton realised that the time had come to take ownership of his finances, and he and his new bride needed to live their own lives. Although initially this was not easy, Anton felt a burden was lifted both in terms of his bank account and in gaining financial independence through severing a manipulative relationship. 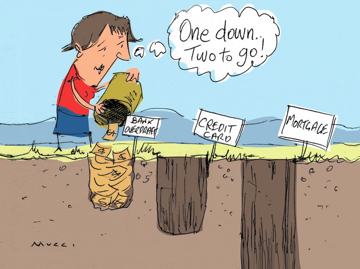 The priority in which to repay these remaining loans to zero should be from those with the highest interest rate to those with the lowest. Or you could consolidate them into a larger loan with a lower rate of interest, and then pay it off. Once your debts are paid off you can redirect the money that was going towards the repayments into achieving other financial goals. This is the main reason you need to get out of debt. The reduction and elimination of debt should be regarded as a very high priority for anyone who wishes to free themselves of the burden of repayments.

Ignore any information you may come across that tells you to pay off your largest debt before paying smaller amounts off. If you followed this advice, you would pay off a mortgage while making minimum repayments on your credit card for years. As you will soon see, minimum credit card repayments are great, but only if you are the CEO of a bank, getting enormous bonus payments from credit card profits.

If you have a number of debts, put every spare cent into paying off the highest interest rate debt while making minimum repayments on the lower-rate loans. Once the first debt is gone, add the money that was going towards paying it off to the minimum repayments on the second-highest interest rate debt. When the second one is gone repeat the same for the next debt and you’ll find that the speed with which you are able to pay off your debts increases. To begin with it might seem to take a while before you notice a big dent in your overall level of debt, but towards the end it’ll pick up pace surprisingly quickly.

Now let’s take a look at the different loans in detail.

Next Sub-topic: Pawnbroker and Payday Loans >>