Only ever bet on a sure thing. -Margaret Haggarty (my mum)

I’ve never seen people expressing delight inside a casino like they do on the advertisements for the casino. This is probably due to the very small chance of anyone consistently beating the system and taking away more money than they bet. Sure, people will always be ready to tell you about their big win, but what they leave out in these stories is the amount of money they lost in the years before and since.

I define gambling as the following: anything at a casino, internet gambling, horses, dogs, all other sports including football and cricket (yes, you can bet on cricket – just ask Shane Warne, Mark Waugh or any fan of Pakistan), lotto, scratchies, keno, pools, powerball and the worst of the lot – pokies. Why are poker machines the worst? It’s because they are by far the country’s predominant form of gambling. 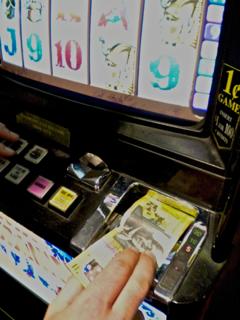 Australia is a nation of gamblers. There is more gambling per capita in Australia than anywhere on the planet, which makes us the world’s biggest losers. Canberrans spend $250 million a year on gambling, and 80% of that goes into the pokies. Northern Territorians also spend $250 million a year on gambling – pretty shocking when you consider that the NT’s population is less than two thirds of the ACT’s, and that Canberrans have the highest disposable income in the country. In fact the lower the income, the greater the chance of problem gambling, which might explain why Sydney’s western suburbs are high on the list of problem gambling areas. A hotel in Canley Heights, western Sydney, has a gaming room with 30 pokies that suck more than $90 million a year from the punters (whose income is way below the Aussie average). Source: ‘Pokies not pubs behind Woolies bid’, Sydney Morning Herald, Thursday 10 Dec, 2009.

All types of gambling are designed so that very, very few people ever win more than they put in. Here is an example of how gambling works: 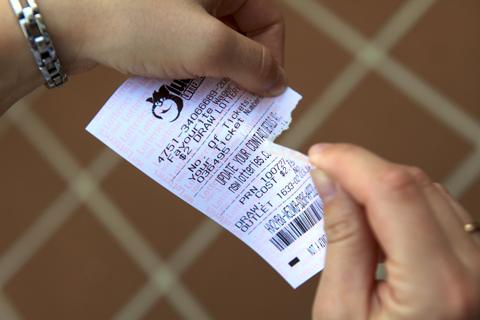 Not a winning ticket. Please note that it costs $2.20 for a ticket in the $2 Jackpot Lottery. Go figure. 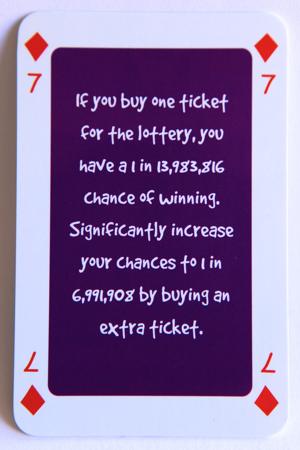 If you think 1 in 15.7 million looks like bad odds, the chance of winning 1st division Powerball with a single game is one in 76 million.

Another type of gambling is a sweepstakes – for example, a workplace sweep for the Melbourne Cup.

Let’s say this contains 24 horses at $1 each. First place would win about $12, second place $8 and third place $4. In the sweepstakes the total money paid out is equal to the total money received, depending of course on how dodgy the colleague who’s running it is. With sweeps paying out 100% of takings and other types of gambling paying out as little as 58% of takings, where does the rest of the money in the non-sweeps gambling go?

Some goes as profit to the business, some goes to the administration costs of running the game, some goes into advertising (you’d be surprised how much it costs the people who run the $2 Lottery to get a bloke in a cat suit to say “You ought to buy yourself a lottery ticket”), and the rest goes in tax.

Australia is ranked around 54th in terms of world population, yet we are ranked no. 3 in the world for our number of poker machines.

A person who knows they have a gambling problem probably knows all this stuff and they realise they won’t win money. So why do they keep gambling?

According to Lifeline, the main reason problem gamblers gamble is escapism. It might start out as a way to unwind at the end of the week. Then as pressures in life increase, problem gamblers will turn to gambling as a way to zone out from their problems without realising that the more they gamble, the more gambling itself becomes the problem they are trying to escape.

Many gamblers don’t feel physical or emotional pain when playing the pokies. One woman who lost 500 grand on the pokies spoke about her experience in an interview with Four Corners. Of one gambling episode she says, “I remember one day I was in a club, in the zone so to speak, and I was so concentrating on what I was doing that … an elderly lady who was playing at the machine next to me fainted and fell off her chair onto the floor. I was only slightly aware of what was happening. An ambulance came, picked her up, put her on a stretcher, took her out, and I did not stop playing throughout that entire episode.” Source: Four Corners: Hokey Pokey.

A person who probably needs help with gambling is one who gambles longer than they planned, can’t stop when they’ve started and regularly gambles to their last dollar.

Why am I bothering to tell you all this when people with a gambling problem make up only about 2% of the population? It’s because for every one problem gambler, an estimated 5-8 people are directly affected (a total of around 3 million Australians), and the most common demographic for problem gamblers is men aged 18-35.

So, the moral of the story: bet once a year in a sweep on the Melbourne Cup. If the prospect of betting only once a year frightens the hell out of you, then play two-up on Anzac Day. 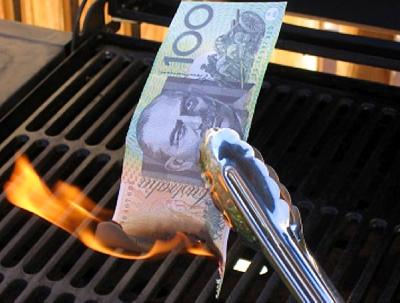 I made sure I didn’t need to do a second take for this photo!

But please remember that gambling is like burning money.

Whether it’s you, your partner, a family member, friend or colleague, there are free services to help anyone with a problem, and the best place to start is Gambling Help Online or ring them on 1800 858 858. Their service is confidential and free, and they can put you in touch with face-to-face help.

If the person with the gambling trouble is you and you have come to this website to help sort out your finances, unfortunately everything you learn from here on will be redundant for you until you are able to tackle your gambling problem. That’s why I start this course by addressing gambling. 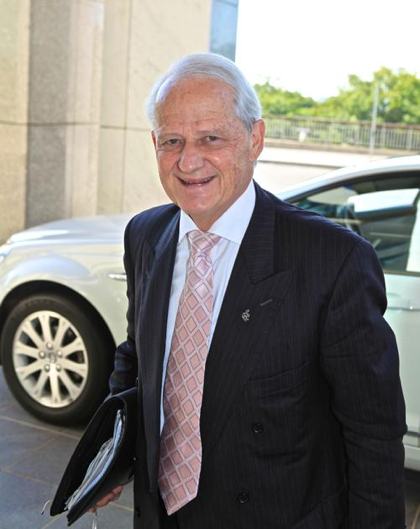 This shot was taken at the entrance to the House of Representatives, Parliament House. I was standing there waiting to get a photo of Ruddock to illustrate the word ‘boring’, when he gets out of his car and sees me taking photos of him. He says to me in a rather jovial manner “Oh, is my tie straight?” to which I reply, “Actually it needs to come a little to the left.” I proceed to straighten the tie and then he poses and smiles for me. I thank him and he walks into Parly. Not sure he would’ve stopped had he known where the photo would end up.

You may, at this point, be asking yourself, “Is this guy for real? Does he actually mean it when he says to bet only once or twice a year?” This is where you need to use your grey matter to make a decision about what you will do before you do it. Then stick to that decision. Taking things to the extreme, you wouldn’t ever bet on anything.

I used to bet only once a year, on the first Tuesday in November. However, these days I do play the occasional game of Poker with some mates (but not at a casino, where the house takes a cut). 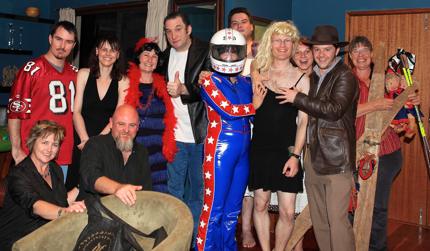 When you know your losses are limited to 10 or 20 bucks in a social event every now and then, gambling is fine. That is very different to gambling for hours online or losing track of how many pineapples you have fed into a poker machine.

As with any addiction, you need to understand the potential for something that starts as a bit of social fun to lead to a life-destroying problem.

1) The chance of winning the top prize on a poker machine is:

2) The most common demographic for problem gamblers in society is:

4) Order the following chances of events occurring from most likely to least likely (drag and drop and they turn green when they’re in the right order);

Source: The Office of Liquor and Gaming Regulation, Queensland