Back to Goal Setting

It is very important when setting financial goals as a couple for both people to be on the same path. If you are not, then you risk not being able to achieve any of those goals. This old clip from Oprah is a good example of two people not working together and the financial consequences as a result.

If you are having problems with money in your relationship, don’t air them on national TV. Do it on international TV!

In the Oprah scenario, whose fault is it? I’ll give you a clue – it’s not his fault. Settle down ladies, it’s not her fault either. Their financial situation is due to the two of them not discussing their financial goals with each other and coming up with a solution that works for both of them. In reality, they could have most of the things they want, if they agreed together what they want, then saved up for those items and paid for them out of their savings.

If you are in a relationship, as a couple you must openly discuss your finances. Hey, you see each other physically naked, don’t be afraid to be seen financially naked (warts and all). You may believe that money is a private matter, and for a lot of people it is. But I believe it should not be a private matter for two people in a relationship. It is definitely not something to be kept private when one member of a couple is spending lots on credit and the other party doesn’t know about it, especially if the person in the dark becomes responsible for paying that debt. Yes, it happens all too often in Australia. It’s a form of domestic violence called financial abuse and if you think you or someone you know may be a victim of it, these are some signs to look for and where to get help.

Couples must decide things like whether to have joint or separate bank accounts, what happens if you start living off one income (who goes to work, who looks after the kiddies), and, if appropriate, discuss pre-nuptial agreements before marriage or living together. 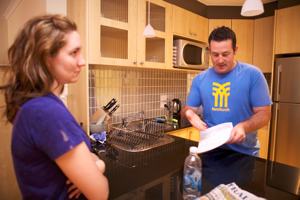 Financial troubles are a big source of disagreement between couples. A report by ipac securities showed nearly 60% of couples disagreed about money, and the incidence of disagreements was higher for those paying off debt. One in three of these problems were not resolved. Like any problem, or potential problem in a relationship, money disagreements will not sort themselves out. You have to talk and work it through yourselves. Understand each other’s financial values, set goals together and celebrate achievements together. 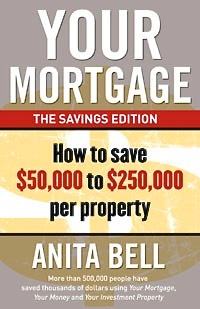 FURTHER READING: Your Mortgage: How to Save $50,000 to $250,000 per property by Anita Bell (Random House Australia, 2009): The best book for budgeting around, but take what she says about investing with a grain of salt.

Our second goal, set before the Debt Elimination topic, was to get rid of any debt we currently have. We can also now refine our other goal of buying a car or house etc. to include the borrowing component and a time factor. For example, your goal is now to buy a car within two years without borrowing money, or to buy a flat with a 20% deposit next year and pay it off in 5-6 years. That’s right, five to six years! Now you probably think I’m crazy or that paying off a mortgage within six years is about as realistic as a plot from a 1980’s porno.

In the Debt Elimination topic I have shown you what to do in relation to debt – pay it off, which is easier said than done. In the Savings topic I will show you how to do it.

But first, you need to know where your money goes – let’s get budgeting! Yay!

Oh come on, budgeting’s not that bad is it?