A pawnbroker advertises as a secondhand goods shop such as Cash Converters. 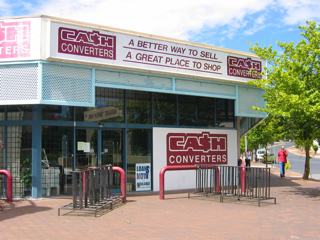 According to a bloke who used to work here, “Cashies have never sold stolen goods.”

These sharks can charge fees and interest amounts that are ridiculously high. It is for this simple reason that you should avoid pawnbroker loans at all costs.

Payday lenders fall into the same category. A payday lender differs from a pawnbroker as the payday lender gets direct access to your bank account to take the money owed to them.

You might have seen ads for a company called Aussie Payday Loans. They stated on their website that, “Sickness, Bills (sic – I think they are talking about bills with a lower case ‘b’, not a number of men named Bill), past unemployment and unexpected emergencies can cause you to … use savings”. Well, um, yes, Aussie Payday Loans, that’s partly why you need savings. If you decide to get a loan with these people, please explore the site thoroughly so that you know you will be paying interest at the rate of 20% a fortnight*.

*Based on 14 day payback period. They don’t even state what the charge is if you fail to pay the loan back inside two weeks.

Another payday lender to rear its ugly head goes by the name of Cash Doctors *Note* – they’ve changed their name to Nimble (the guys who have the stupid ads with the ‘rabbit’). A lot of these companies like to avoid talking about interest rates with their products, presumably because they fear people will run a mile when they discover how high those rates are. Instead of interest rates they refer to fees. The image there on the right is a screen shot I took after an online chat I had with Cash Doctors. The line in red is me asking a question that confirms the exorbitant fees they charge. 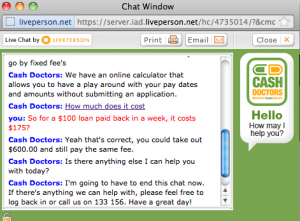 After paying a rate of interest as high as 75% for a single week with a Cash Doctors loan, the pain in your chest may require you to seek the services of a real doctor. Hmm, maybe that’s why they changed their name.

If your financial circumstances are such that you are thinking of approaching a pawnbroker or payday lender, consider using a credit card instead. That’s if you have absolutely no other option and it’s an emergency. If it’s not an emergency, don’t borrow money.